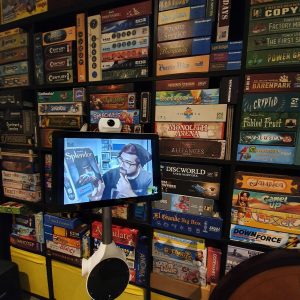 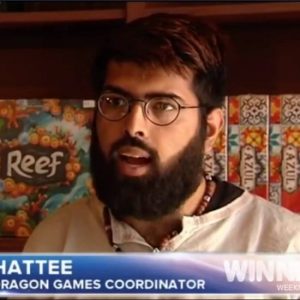 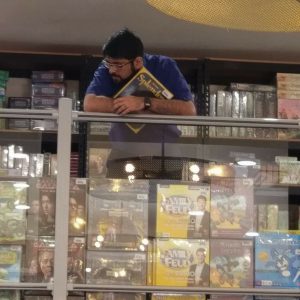 Awais is an avid boardgamer since 2008, who after discovering the hobby ran boardgame clubs at ANU and UC. While studying he worked in retail and had the privilege of joining the team at the local friendly boardgame store in Civic. Afterwards he also worked for geek restaurants, one in Civic and one in Tuggeranong.

He started blogging and making videos about boardgames in 2017. And after missing the pleasure of chatting with customers, started as an independent seller of boardgames and puzzles at local popup markets and online.
Once known as ‘Meepleman Canberra’, Awais decided to change the name of the brand to ‘Game Knight Canberra’ in 2021.

Media Appearance:
ABC Canberra Radio
Back when I was the Social Media Manager at The Games Capital, we were approached to do an interview for ABC Canberra Radio. I had no idea what to expect in my first public interview but the staff were super nice and we had a fun chat!

WIN News
Over the Summer of 2018/19 I had the privilege of helping The Copper Dragon start their business. It was great to get a lot of local media coverage and even get a segment on WIN NEWS CANBERRA. They say the camera adds ten pounds, didn’t expect to all go to the beard :p

Dice Tower
As a big time fan of the Dice Tower Youtube Channel, I have been watching their content for years and years. One of the video series they create is a weekly variety show called Board Game Breakfast. I submitted a video once and felt so lucky to have been included on the show!!!

Can be contacted via Facebook Messenger for any questions or for making requests/preorders.

Email and Phone Number are currently unlisted to avoid spam from bots, but feel free to contact me via those methods if you already have those details.

Once an order has been made, you will be contacted directly by Awais so that pickup or delivery time can be arranged.

2nd Hand Games can be inspected before purchase is finalised.

Free Pickup: Location is my home in Lyneham, 2602. But can be arranged to meetup at a local boardgaming event as well.

Hand Delivery to Southside Canberra/Queanbeyan: Flat rate of $20 (sorry, it just takes me more time to drive there and back)

Free Hand Delivery for orders over $150

There are no ad or traffic tracking on this website.

Information of this website and customers are stored securely on the cloud managed by an Australian Web Hosting Company.

Game Knight Canberra complies with the Privacy Act 1988 (Cth) and all other ACT and Australian Rules and Regulation.

Meepleman Canberra has recently rebranded to Game Knight Canberra. Thanks for joining us on the new site! Dismiss